Azman Air airline yesterday disowned  a protest letter to the Nigerian Civil Aviation Authority ,NCAA, after the regulatory authority suspended the flight operations of the airline to enable it carry out safety audit of the airline fleet of Being planes

In the protest letter which went viral online,  the Director General, NCAA, Captain Musa Nuhu was accused of unprofessionalism and extortion.

Reacting to the protest letter allegedly issued by the airline and addressed to  NCAA , the Accountable Manager of my Azman Air, Muhammad Abdulmunaf,  said in a statement that the letter didn’t emanate from them and is a “deliberate falsehood targeted at discrediting the the DG and the airline.”

Muhammad said : ” We wish to state categorically that the recent publication making  the rounds in the media in which an attack purported to be masterminded by Azman Air in reaction to NCAA’s suspension of its operations was launched on the integrity of the NCAA DG, Captain Musa Nuhu never came from Azman Air.

” We had our request for expatriate pilots turned down but this has nothing to do with the integrity of the DG as a person as other airlines were so treated, hence we have decided to conduct an internal investigation to find out the source of the letter.

“How could we allege extortion against the DG for requesting that we pay for an advert featuring Azman Air in an ICAO magazine when the said payment wasn’t for him but for the publishers? That we didn’t pay as and when due wasn’t a sign of refusal to pay but an innocent oversight on our part.

“How could we have alleged any wrong doing against the DG for carrying out his duties? It is within his core mandate to take the decision he took suspending the operations of our 737s and we are not unaware of the very high premium the agency under him places on safety.”

“We are leaving no stone unturned in our resolve to fish out the authors of this falsehood calculated to damage our rating. We wish to state that that Azman Air is willing to corporate fully with its investigations of our operations as safety is our watchword,” Abdulmunaf added.

After the protest letter allegedly issued by Azman Air was made public,  NCAA addressed all the issues raised in the letter and made it clear ” it was cheap blackmail ” the regulator will not succumb to.

NCAA says Azman Air was an accident waiting to happen 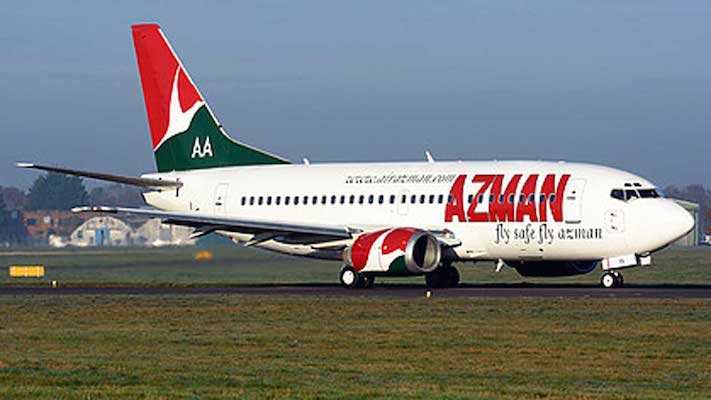 The Nigerian Civil Aviation Authority (NCAA) has said that the suspended Azman Air was an accident waiting to happen due to the series of serious incidents and numerous unprofessional conducts the airline involved itself in recent times. The regulatory agency disclosed that the troubled airline had at least three serious incidents, including burst tyres in […] Read Full Story

By Lawani Mikairu Azman Air Boeing 737 aircraft with registration 5N SYS, and flight number ZQ2325 Tuesday evening had a tyre burst after landing on runway 18 R of Muritala Muhammed Airport, Lagos. Though no life was lost in the incident, but the mishap  has forced Federal Airports Authority of Nigeria, FAAN, to close the
Read More

By Lawani Mikairu Nigeria Civil Aviation Authority , NCAA, Tuesday said that it has suspended the flight operations of Azman Air due to series of safety incidents involving the airline’s Boeing 737 aircraft. A statement signed by the Director General of NCAA, Captain Musa Nuhu, read that the airlines operations are suspended with immediate Effect.
Read More