The Association of Licensed Telecommunications Operators of Nigeria has said they would disconnect Financial Service Providers from Unstructured Supplementary Service Data services from March 15, until they pay their over N42bn debt.

The association announced this in a statement titled ‘Withdrawal of USSD services to financial service providers due to huge indebtedness to telecom network operators’, and signed by its Chairman, Gbenga Adebayo and Head of Operations, Gbolahan Awonuga.

ALTON explained that the service withdrawal had become necessary due to the lack of agreement on a payment structure with the banks that did not involve the end-user being asked to pay.

It noted that following the issuance of the USSD pricing determination by the Nigerian Communications Commission which resulted in a price review of USSD service by the telcos, the banks decided that they would no longer pay for USSD service delivered to their customers and requested the telcos to charge customers directly for use of the USSD channel.

The telcos complained that the banks, however, provided no assurances that such service fees charged to customers’ bank accounts for access to bank services through the USSD channel would be discontinued post implementation of end-user billing by the telcos.

The statement said, “It has been more than eight months since the NCC issued an updated pricing methodology for USSD services for financial transactions in Nigeria.

“The methodology explicitly restricts Mobile Network Operators from charging the end user for the services and mandates the banking sector to enter into negotiations to settle outstanding obligations and agree individual pricing mechanisms to be applied going forwards.

“During this time, MNOs have continued to provide access to USSD infrastructure and our members have continued to pay all bank charges and fees to access the banking industries assets and customers, despite the fact that obligations due from banks to telecoms companies for USSD services has reached over N42bn.”

The telecom operators said this was because of in consideration of millions of Nigerians who had become more reliant on accessing financial services through the USSD infrastructure due to COVID movement restrictions.

They noted that due to the inability of the banks to agree on a payment structure, the government had been forced to intervene to ensure a sustainable cost-sharing solution was agreed that did not disadvantage the consumer in the long-term.

The association also mentioned that the removal of the service fees by the FSPs would have meant that if bank customers were charged only the USSD costs communicated by telcos per USSD session, bank customers would be paying far less than what they were currently being charged by the FSPs, which in some instances were as high as N50.

They added that both the banks and telcos would be applauded for collaborating towards the financial inclusion objectives of the Federal Government.

ALTON said, “We deeply regret that we have reached a point where the withdrawal of these services has become unavoidable, however, we remain committed to working closely with the relevant ministries and regulators to resolve this issue as quickly as possible.

“To minimise the disruption to customers, and with the concurrence of the Minster of Communications and Digital Economy and the Nigerian Communications Commission, on the huge debt to the Network operators; MNOs will disconnect debtor FSPs from USSD services, until the huge debt is paid.

“Therefore, our members are initiating a phased process of withdrawal of USSD services, starting with the most significant debtors within the FSPs effective Monday March 15, 2021.”

They encouraged subscribers to explore alternative channels with their banks.

The Federal Government, on Saturday, asked telecommunication operators to put on hold, their impending suspension of Unstructured Supplementary Service Data services over a N42bn debt owed by banks. This was contained in a statement signed by Femi Adeluyi, technical Assistant on Information Technology to the Minister of Communications and Digital Economy, Isa Pantami. READ ALSO: Herdsmen […] Read Full Story 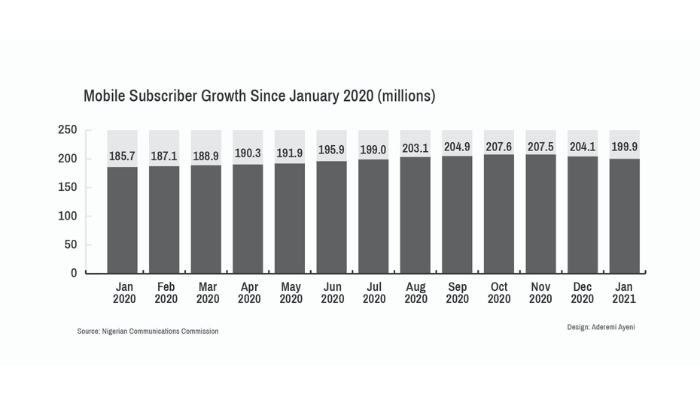 Telecommunication operators in Nigeria continued to count losses in January as over 4 million subscribers left the various networks as the order to suspend new SIM registration enters the third month. The over 4 million subscribers that exited is the highest since the Nigeria Communications Commission (NCC) began to release the industry data in May […] Read Full Story

Okechukwu Nnodim, Abuja It was learnt in Abuja on Monday that the ministerial task force on National Identity Number linkage with Subscriber Identification Module held a virtual meeting on Monday to assess the progress as the February 9 deadline draws near. The Chairman, Association of Licensed Telecommunications Operators of Nigeria, Gbenga Adebayo, confirmed that the […] Read Full Story