ESCALATING attacks on schools and mass abductions of schoolchildren by bandits and jihadists is compounding the crisis of education in Northern Nigeria. Once the signature atrocity of the Boko Haram terrorist group in the North-East, bandits, their ranks swollen by hordes of cross-border desperados, have recently invaded schools and kidnapped children and staff for ransom in the North-West and North-Central regions. Beyond the disruption of farming, transport, commerce, investment and social life, the renewed onslaught on learning deepens the North’s educational backwardness and further retards regional and national development.

This represents a great challenge for the federal and northern state governments; the one to effectively deploy its security forces to crush the bandits and terrorists, the other to support the security efforts with community policing and most importantly, to accord education topmost priority. Sadly, neither, with a few exceptions, has so far demonstrated sufficient awareness of the gravity of the unfolding crisis or responded with creative, effective policies to protect schools and mobilise the population for mass education. This should change as the region is moving towards total lawlessness.

Undoubtedly, the country is at war, as a Nobel laureate, Wole Soyinka, remarked. The northern governors should realise this, stop living in denial and adopt necessary proactive measures. According to the United Nations, there has recently been a resort to mass abductions and exposure of children to extreme violence in conflict zones. It said this requires special measures to protect the 250 million children worldwide living in conflict zones and provide them with schooling and health care.

At least eight northern states have shut down schools and suspended boarding. News of the kidnap in mid-February of 27 students, 12 of their relatives and three staff members in Kagara, Niger State, was still trending worldwide and negotiations ongoing between the government and the confident bandits when on February 26, bandits spectacularly stormed a girls’ school in Jangebe, Zamfara State, and unchallenged, herded 317 girls into captivity. Both groups of victims have since been released. Earlier in December 2020, bandits cheekily raided a boys’ school in Kankara, Katsina State, just over two hours’ drive from Daura, where the President, Major General Muhammadu Buhari (retd.), was vacationing and took 344 pupils into the forests. This trend had begun with the terrorists whose name, Boko Haram, roughly translates to “Western education is a sin,” and who launched and have sustained their murderous jihadist enterprise with attacks and arson on schools, murder of teachers and capture of schoolgirls. Of the 276 girls they notoriously kidnapped in Chibok, Borno State, in 2014, 110 remain in captivity. Four years later, they kidnapped 110 girls from a girl’s secondary school in Dapchi, Yobe State, but released them two months later after negotiations and a rumoured ransom except Leah Sharibu, who they still hold as punishment for refusing to renounce her Christian faith.

See also  Man shall not live by meat alone

This sustained assault on schooling is devastating for the Northern region that, according to UNICEF, hosts the overwhelming majority of Nigeria’s 13.2 million out-of-school children. One out of every five children not attending school worldwide is in Nigeria. Apart from the 314 schoolchildren the UN reported killed by terrorists between 2012 and 2014, hundreds more have since been captured and trained as servants and child soldiers by jihadists and bandits, said Amnesty International. Some 952,029 school age children had fled violence in the North-East, resulting in over 600,000 losing access to learning.

The horrors have spread to the North-West and North-Central. Bandits killed over 1,100 persons across six states there in 2018, over 2,200 in 2019 and 1,600 in the first six months of 2020, producing 247,000 IDPs and 41,000 refugees in neighbouring countries, according to rights groups. Southern Kaduna activists say bandits and Fulani militants have pillaged scores of villages in the area, turned residents into refugees and disrupted schooling.

Child marriage, criminality, drug abuse and very poor human development indices pervade the North. Change will come only when the Northern governors and elite shift from religiosity, denial and their abhorrent preoccupation with politics to concentrate on development. The children they refused to educate decades ago are today’s terrorists, bandits and killer herdsmen. They need to take responsibility for educating the region’s children as constitutionally mandated and take maximum advantage of federal support programmes and funding. They should muster the political will to drive mass compulsory education and domesticate the Child Rights Act that mandates nine years of free and compulsory child education. Indonesia, the world’s most populous Muslim majority country, makes education compulsory for 12 years and has a 96 per cent literacy rate; the United Arab Emirates, Saudi Arabia and Jordan each have 99 per cent literacy rate. The Northern states should draw from the UN-backed NGO-run Education in Emergencies Working Group that has been providing schooling in the IDP camps in the North-East.

See also  Act now on avalanche of guns and gunmen

It is a defining challenge for the Northern leaders to end the abuse and misuse of religion. Serious commitment to education will reduce sectarian or religious tensions in the region. States and local governments should shoulder full responsibility for providing education to their people; in today’s ICT and knowledge-driven world, an uneducated population is a liability in every conceivable way. The centre can only support. The anachronistic almajiri system should be stamped out resolutely and schools expanded to accommodate them.

There should be firmness in matters of law and order. At the heart of this is the deployment of massive security measures, relying on both human and technology-driven intelligence, at schools by the state and LGs coordinating with the federal security agencies. The wrong-headed, failed approach of negotiating and buying off bandit-kidnappers should give way to a resolute determination to stamp out criminality, bring offenders to swift and severe justice, mop up illegal arms and expel all the foreign bandits and herders that have taken advantage of lax borders, corruption and weak institutions to wreak havoc on Nigeria and the North’s fragile educational system.

PRESIDENT Muhammadu Buhari on September 24, 2019 in New York during the 74th Session of the United Nations General Assembly, expressed Nigeria’s hope to have at least 30 per cent of its total electricity supply from renewable sources by 2030. Also, Vice President, Yemi Osinbajo, re-echoed the hope recently at the inauguration of a 1.12MW
Read More

AGENCY Banking – using Point of Sale, PoS, terminals introduced by the Central Bank of Nigeria, CBN, to facilitate the cashless economy policy – has become a source of violent death for our youths. Agency Bankers receive and give out cash to customers using the PoS. They are licensed by commercial banks to penetrate remote
Read More

Many laws in Lagos, yet, unending traffic crisis

February 5, 2021 The Editorial Board Uncategorized 0 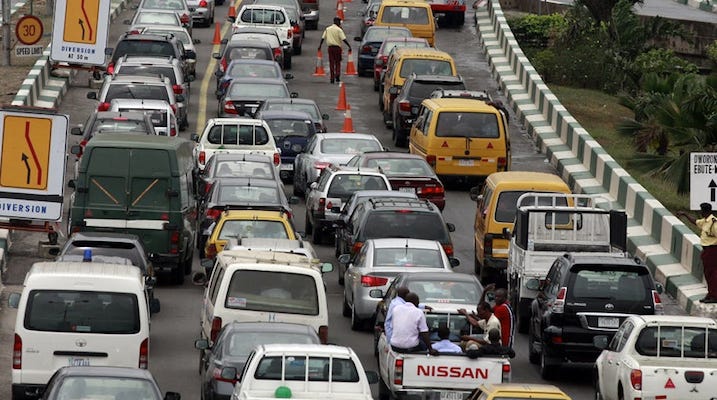 Due largely to the nature of its environment, which is very challenging, Lagos, Nigeria’s commercial nerve centre, has laws on virtually everything. It is such that residents joke among themselves, saying that one day the state will come up with laws on breathing, eating and sleeping. Prominent among these laws is the Traffic Law, which […] Read Full Story