*As YOV seeks massive deployment of security to Oyo

FORMER Deputy National Chairman of the Peoples Democratic Party, PDP, Chief Bode George, has urged President Muhammadu Buhari to provide leadership and unite Nigerians. He noted that the clashes between herdsmen and farmers, especially across South West, can only be stopped with the ban on open grazing. This came on a day some elders from the South West, advised governors in the region to make use of drones for aerial surveillance to check rising inter-ethnic in the affected states. Similarly, a coalition of Yoruba groups and organisations in the Diaspora, Yoruba One Voice, YOV, has expressed concerns over the breakdown of security in many zones. It called for the massive deployment of security forces in the zone, especially Oyo State, where many innocent citizens were recently killed and displaced following an ethnic conflict in Shasha area of the state. Bring back Nigeria from the brink Speaking a press briefing titled: ‘We Must Withdraw From The Brick’, George expressed worry that governments at all levels are fast losing grip on protecting lives and properties adding that this is not the time for ethnic or sectarian jingoism. He said: “This is the time that President Muhammadu Buhari should demonstrate a rallying unifying leadership to bring all our people together. Surely, this is not the time for ethnic or sectarian jingoism.
READ  Senate To Debate Farmers/Herders Crisis On Tuesday
“This is the time for healing. This is the time to mend the broken places and rectify the pervasive wrongs. Our people have been living together in peace and harmony for more than 100 years even before the colonialists imposed the rule of gunpowder. “The widening spread of banditry, the reckless shedding of innocent blood, the bitter murderous clashes between farmers and herdsmen, the loose brigandage, have virtually made all corners of our society insecure, vulnerable to the rule of the cudgel and machete.

“Governance everywhere is fast losing its grip on the first principles of protecting lives and properties. From Sokoto to Lagos, from Ebonyi to Borno, from Katsina to Ogun and from the Savanah to the rain forest, lives are daily cut down without the culprits being brought to pay for their crimes. “Road users are kidnapped, brutalized, exposed to un-imaginable kinds of cruelty and then forced to pay ransom. “We must restructure the Nigerian entity to ensure its survival as a nation. There are so many aberrations thwarting equitable governance in our country.
READ  Deregistration: Court dismisses African Peoples Alliance suit against INEC
“The centre is too encumbered with many responsibilities. It is overburdened, stressed with unnecessary functions that ought to be devolved to the states. “Our federation is only a federation in name, it is more of a unitary system, barking out Command and Control like a military hierarchy.” Use drones to check inter-ethnic crisis— South-West leaders Similarly, the South-West elders, who spoke under the aegis of Majeobaje movement after its emergency zoom meeting to discuss series of interethnic clashes in the South-West, called for the immediate de-escalation of ethnic rumblings by all sides. In a communiqué jointly by its convener and team leader, Publicity and Sensitization, Messrs Akintayo Akin-Deko and Yomi Layinka respectively, the elders also called on the governors to give more support to the Western Nigeria Security Network codenamed Amotekun in their various states. The communiqué reads: “While our South-West governors have improved in the handling of security matters, a lot more still needs to be done especially by way of more support for and urgent capacity development for Amotekun. “For example, their herculean task would be significantly facilitated by the urgent deployment of drones for aerial surveillance across the forest reserves and highways of the South-West states.” YOV seeks massive deployment of security to Oyo On its part, the YOV, in a statement by its Secretary-General, Dr. Sina Okanlomo, strongly condemned the violence and provocation in Shasha, adding that the incident might be deliberately designed to subdue the Yoruba nation.
READ  Herders/Farmers’ clash: Ogun monarch cautions subjects against harbouring strangers
The statement reads: “The spate of hostilities and unwarranted attacks against us (Yoruba) clearly shows that our affable trait is being taken for granted. “We are aware that some politicians are covertly sympathetic to the killer-herdsmen in the South-West, but it was a surreal experience for us to see the governor boldly supporting their evil acts in the public. “That a governor who took the oath to protect and preserve the constitution of the Federal Republic of Nigeria is now an apostle of lawlessness and killings only show the caliber of those leading Africa’s most populous country. “He has in one breath conceded that herdsmen carry AK-47 rifle and at the same time encouraging all to do likewise. “The statement is uncouth, insensitive and despicable, especially against families and people that have been at the receiving end of these killer-herdsmen. This is simply a path to anarchy from the governor. “Based on his support for herdsmen’s free movement around the country with sophisticated weapons, we declare him unfit for any leadership position and we support calls that he should apologise to all well-meaning Nigerians.” Vanguard News Nigeria The post Herdsmen/Farmers Clash: Bring back Nigeria from brink, Bode George tells Buhari appeared first on Vanguard News. 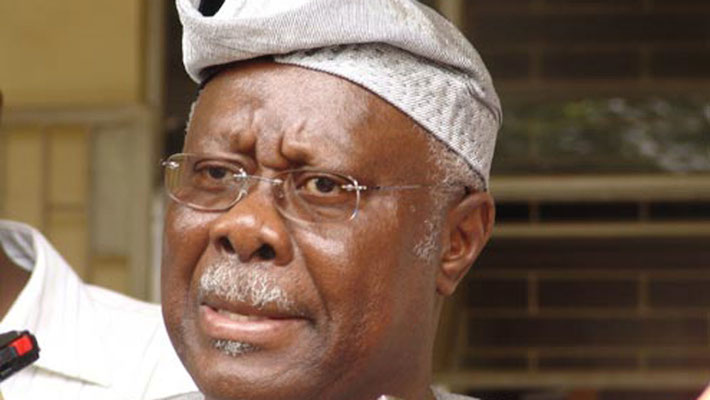 Bode George, a former deputy national chairman of the People’s Democratic Party (PDP), has asked the Lagos State government to prove that Seyi, the son of the All Progressives Congress (APC) national leader, Bola Tinubu, does not control the Lekki tollgate. George demanded that the terms of the agreement between the Lekki Concession Company (LCC) […] Read Full Story