The World Trade Organisation, WTO’s General Council will hold a special meeting next Monday, February 15, at 3p.m., to consider the appointment of the next Director-General.

The meeting will take place in a virtual format.

Vanguard reported that of the final two candidates for the WTO top job, Yoo Myung-hee, South Korea’s Trade Minister, withdrew from the race.

This leaves Dr. Ngozi Okonjo-Iweala, Nigeria’s candidate, as the sole choice for the position.

Therefore, the General Council’s meeting of February 15 is just a formality to appoint Dr. Okonjo-Iweala as WTO’s D-G.

The procedures for appointing the WTO Director-General are described in document WT/L/509.

The nomination period for the 2020 D-G selection process ended on July 8, with eight candidates nominated by their respective governments.

On July 13, the General Council agreed that there would be three stages of consultations with WTO members commencing on September 7, to assess their preferences and to determine which candidate is best placed to attract consensus support.

The General Council Chair announced on September 18 the results of the first round of consultations and the five candidates advancing to the next stage.

On October 8, he announced the results of the second round of consultations and the two candidates advancing to the third round.

The results of the final round of consultations were announced on October 28. 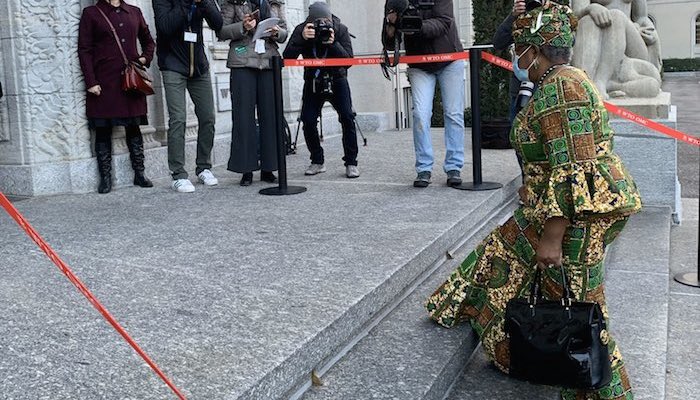 Nigeria’s former finance minister, Ngozi Okonjo-Iweala, on Monday assumed office as the director-general of the World Trade Organisation (WTO). Disclosing this on its verified Twitter handle, the global trade organization said Okonjo-Iweala was the first woman and African to take up the job. “Welcome to Ngozi Okonjo-Iweala; @NOIweala on her first day as WTO Director-General! […] Read Full Story

Okonjo-Iweala To Be Confirmed As WTO Boss Today

Nigeria’s Ngozi Okonjo-Iweala looks set to be confirmed Monday as the first woman and first African leader of the beleaguered World Trade Organization, a near-paralysed institution desperately needing a kick-start. The WTO has called a special general council meeting at which the former Nigerian finance minister and World Bank veteran is expected to be formally selected … END_OF_DOCUMENT_TOKEN_TO_BE_REPLACED Read Full Story