Minister of Science and Technology, Dr Ogbonnaya Onu, has said that the data that will be generated from the ongoing All Progressives Congress, APC, revalidation and registration of the party’s membership will help to improve job creation in Nigeria.

He, therefore, urged Nigerian youths to join the party in mass, stating that it was only the ruling party that has concrete programmes for the younger generation.

Onu noted that youths were the treasures of the nation and far more valuable than all the country’s natural resources, adding that with youth’s embrace of the party, they will join hands with the older men and women to build Nigeria of their dream.

Onu made the remarks when he revalidated his APC membership in unit 003, Obiozara ward one, in Ohaozora local government area of Ebonyi state, on Tuesday.

He said that the revalidation and registration of the party’s membership became necessary because the party was growing and needed data of its old and new members to help the party make provisions and projections of its spread and growth.

He stated that despite the few crises generated by the ongoing exercise, the party has the mechanism of resolving conflicts, which he said was the strength of the party.

“The revalidation and registration are very important because the party is growing and you know the APC was registered in 2013, many people don’t know that we are barely seven years old as a political party and as we are growing there is the need from time to time to have the revalidation because there are those who were members before but are no longer members and new people are coming into the party.

“I call on young people, the youths in Nigeria; because the future belongs to them and the youths are the treasures of Nigeria. I’ve said it that all our natural resources, Gold, Silver put together, the youths are far more valuable.

“We are lucky that the bulk of our nation is made up of young people. So I would like to call on the young people to come into APC, because this is a political party that means well for the nation, so that the young and the old, men and women, working together, we’re going to build the Nigeria of our dream.

“Mr President has made a promise that in ten years, 100 million Nigerians will be moved out of poverty,” Onu said. 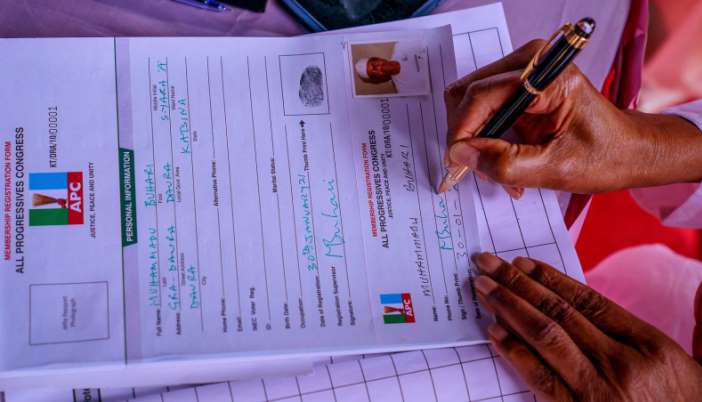 The shortage of registration/revalidation materials experienced in many states has caused the All Progressives Congress (APC) to extend the exercise by three weeks. APC had begun nationwide Membership Registration and register update exercise on Tuesday 9th February 2021 across the 36 states of the federation. But the party’s National Secretary, Caretaker/Extraordinary Convention Planning Committee (CECPC), […] Read Full Story

Tunde Oyekola, Ilorin Minister of Information and Culture Alhaji Lai Mohammed has called for the cancellation of the registration and revalidation exercise in Kwara State saying that it is a failure in the state. Speaking on Monday in Oro in Irepodun Local Government Area of Kwara State after registration in Unit PU006, Oro Ward 2, […] Read Full Story

The Police Command in Benue State has confirmed the murder of Mr Tersoo Ahu, the Ward Chairman of the All Progressives Congress, Gboko South, Gboko Local Government Area by suspected hoodlums. The Command’s Police Public Relations Officer, Catherine Anene, confirmed the incident in a telephone interview with the News Agency of Nigeria on Sunday in […] Read Full Story