The desire of the All Progressives Congress (APC) to retain power at the centre and take control of more states at the 2023 general election remain uncertain as a result of leadership crisis rocking the ruling party.

APC had gone into the 2019 general election with unresolved crises that made it to lose some states such as Zamfara, Bauchi, Adamawa and Oyo to the Peoples Democratic Party (APC), while it was barred from fielding candidates for Rivers State.

The ruling party was thrown into serious internal crisis, following the introduction of direct mode of primaries in some states by the then National Chairman, Adams Oshiomhole which led to parallel primaries that culminated in legal injunctions, defections and bickering that affected the party in those states.
For instance, in the Rivers State primary elections in which the Rotimi Amaechi, the Minister of Transportation-led faction and that of the Magnus Abe, then Senator for Rivers South East conducted parallel primaries, a development that denied APC in the state the opportunity to field candidates for the 2019 general election.

The most striking was the Supreme Court ruling that all the votes won by APC candidates in Zamfara State were useless; hence, the party did not conduct valid primaries as required by law and ordered that the party with next highest votes cast should be returned elected.

Consequently, the then APC Governor-elect in Zamfara, Mukhtar Idris; Senator-elect, former governor Abdulaziz Yari Abubakar who was already making moves to become Deputy Senate President in the 9th Assembly, amongst other National and State Assembly candidates found themselves in the same situation as the biblical Moses who actually saw the land of Canaan but could not enter.

The Zamfara incident particularly generated bad blood amongst APC chieftains such as Lawal Shuaibu, then APC Deputy National Chairman (North), who demanded for nothing less than Oshiomhole’s resignation.

Shuaibu had in a letter dated May 27, 2019 addressed to the chairman, noted that in advanced democracies, people who fail to add value or build over and above what they met on assumption of duty show some civilised examples by resigning honourably.

“I want to advise you to take the path of honour, to step aside and allow the party to embark on the onerous task of reconstruction and rehabilitation in those states it was weakened by the effect of the last primary election exercises.

“Or even the task of recreating the party where it is on the path of extinction, arising from the loss of a sitting APC Government, for example in Zamfara State, where you directly and personally created the problem leading to the painful complete loss of APC’s electoral fortunes.

“From up to down, all these are uncontestable facts. You cannot exonerate yourself from what happened to APC (in) Zamfara State, thereby destroying the hopes and aspirations of 534,541 APC members and supporters,” he said.

The crisis in APC also led to the defection of Governor Godwin Obaseki of Edo State to the PDP, when he was screened out from participating in the party’s governorship primary, making APC to lose the only state it was controlling in the entire South/South geopolitical zone.

As a bold step to nip the crisis in the bud, APC had in June 2020 dissolved the Oshiomhole-led National Working Committee (NWC) and appointed the
Governor Mai-Mala Buni-led Caretaker/Extra-ordinary National Convention Planning Committee to amongst other things, reconcile aggrieved members of the party.

The Committee had also said it would address life-threatening challenges for the party in 11 states across the country and ensure the return of political heavy weights such as the former Speaker of the House of Representatives, Yakubu Dogara; former People’s Democratic Party (PDP) National Chairman, Barnabas Gemade, several members of the National Assembly.

Not meeting up with its second mandate of organising a convention for the election of substantive leadership, the NEC again renewed the tenure of the Caretaker Committee but dissolved zonal, state, local government and ward elected executives and reappointed most of them as Caretaker.

The development has since renewed crisis in the party as different factions in many states are making claims that their people were not appointed into the Caretaker with the aggrieved heaping accusations at the Buni-led Committee.

Few weeks ago, some critical APC stakeholders from Kwara in the camp of the Minister of Information and Culture, Lai Mohammed and Minister of State for Transport, Gbemisola Saraki
rejected the removal of the APC State Caretaker Chairman, Bashir Bolarinwa by the Buni-led National Caretaker Committee of the party and insisted that the appointment of Samari Abdullahi as Caretaker Chairman should be reversed.

Led by Akogun Oyedepo, the stakeholders said: “We found it difficult to believe that the leadership of a National political party like the APC will flagrantly abuse its constitution by the purported removal of our state chairman.

In less than 24 hours, another faction loyal to Governor Abdulrahaman Abdulrazak thronged APC National Secretariat and affirmed that Samari was the authentic state chairman.

Just before that, there was a purported suspension of Rotimi Amaechi, minister of Transportation, Andrew Uchendu, former Rivers East Senator and Victor Giadom, former APC Deputy National Secretary as members of the party in Rivers State by a group that claimed to be ward executives led by lgo Aguma believed to be in the Abe faction.

The suspension was however, declared null and void by APC National leadership which said: “The Rivers State Chapter of the All Progressives Congress is led by the Hon. Isaac Abbot Ogbobula who were duly sworn in at the National Secretariat of the party on the December 11, 2020 by virtue of the National Executive Committee directives issued at its 8th December, 2020 meeting held at the Council Chambers of the Aso Rock Villa, Abuja”.

While crisis continues to brew in many state chapters of the party amongst leaders of the party on who controls the structures such as in the case between former Governor Rochas Okorocha and the incumbent, Hope Uzodinma in Imo and former Governor of Bauchi, Mohammed Abubakar and former Speaker of the House of Representatives, Yakubu Dogara, there are many suits in different courts, challenging the existence of the Caretaker Committee.

Pundits say that crisis, if not well-managed, could lead to the balkanization of the party, as some top leaders are already working on rolling out new platforms that would translate to a new political party which could weaken the ruling party ahead of 2023.

For instance, Okorocha, while commissioning projects in Rivers State, recently called for the people in APC and PDP to come together and rescue Nigeria in 2023.

He also told journalists in Abuja that himself and other progressive-minded politicians are muting a new political order as a result of the silent agitations and complaints across the country against the current state of the nation.

He said: “APC was a hurried arrangement; it was hurriedly formed to take power when the then government was drifting. APC would have been better until people who were not members of the party; people who came for congratulatory message hijacked the party and became Lords”.

CPC under which platform President Muhammadu Buhari contested the 2011 Presidential election was among three major political parties that merged with others to form the APC in 2013.

The former CPC Chairmen in a communiqué issued at the end of its inaugural meeting in Abuja, signed by the newly elected Chairman, Dan Zogo expressed support for power shift to the South and generational power shift.

The communiqué read: “The inaugural meeting of the New Nigerian Movement (NNM), a socio-political group, comprising of patriotic and credible Nigerians who are determined to give a new direction held in Abuja, the Federal Capital Territory, Monday, 18th January, 2021.

“The New Nigerian Movement (NNM) therefore, resolved to team up with patriotic Nigerians and the President to move the country forward. Our Movement is in total of the clarion call by Nigerians for power shift to the South and generational power shift”.

Also, the planned membership registration and revalidation is going to be another breeding ground for crisis that would ultimately tear the party apart as it been speculated that the exercise is hijacked by some governors who have Presidential ambition in 2023.

One of the insiders who pleaded anonymity confided in BusinessDay that the registration is targeted at disarming the APC National Leader, Bola Tinubu ahead of the forthcoming Presidential election as his support base would be invaded.

The APC Chieftain said: “The membership registration is aimed at breaking the ranks of Tinubu supporters to jeopardise his Presidential ambition. That is why you see the Governors taking charge. Don’t you see that Yahaya who is eyeing presidency is the one leading campaign for membership registration? What of the Niger Governor Bello who is the Chairman of the Committee. The plan is to take control of the party to kick Tinubu out”.

John Alechenu, Abuja Governors elected on the platform of the All Progressives Congress have expressed grief over the death of one of the founding fathers of the APC, Tony Momoh, who died on Monday at the age of 81. This was contained in a statement titled, “Condolence Message on the Death of Prince Tony Momoh,” […] Read Full Story 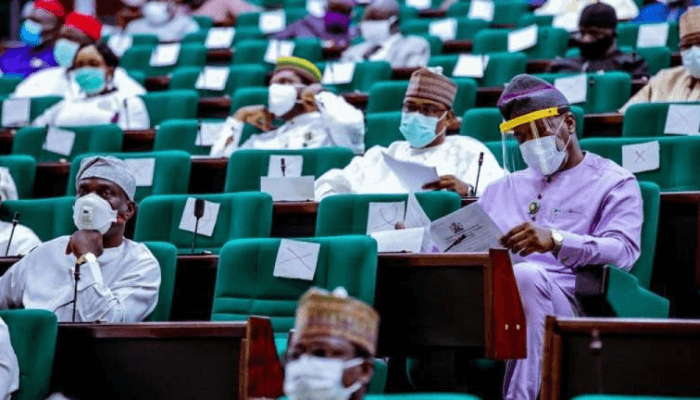 There appears to be confusion as to whether it is the responsibility of the National Assembly or the Independent National Electoral Commission (INEC) to review constituency delineation in the country. While INEC said it cannot review the existing constituencies into the National Assembly unless there is a constitutional amendment by the legislature, the House of […] Read Full Story