Men of Ogun State Police Command on Sunday arrested nine suspected members of a notorious land-grabbing syndicate for unleashing violence on the people of Agbogun village in Ewekoro Local Government Area of the state.

The Police Public Relations Officer in the state, DSP Abimbola Oyeyemi disclosed this in a statement on Sunday.

Oyeyemi said the policemen attached to Obada-Oko divisional headquarters received a distress call from the Baale of the village.

The PPRO said the village head hinted the police that the land grabbers who came from different areas of Ifo, Atan, Gasline and Sango-Ota have invaded the village.

He said the Baale lamented that the hoodlums were violently attacking the people, extorting money from those working on their sites.

See also  Missing arms fund: I was quoted out of context – NSA

Oyeyemi said, “Upon the distress call, the DPO Obada-Oko division CSP Benard Ediagbonya mobilized his patrol team to the scene where they met the suspects attacking one Mrs Oniyide Folashade and one Mrs Agbogun who were developing their sites.

“On sighting the policemen, the hoodlums took to their heels but they were chased and nine amongst them were apprehended.”

Oyeyemi, however, said the Commissioner of Police, Edward Ajogun, has ordered a massive manhunt for the rest of the hoodlums.

The PPRO said, “He also warned land grabbers to stay clear of the state as the Command under his watch will not tolerate any form of violence on the good people of the state from anyone or group no matter how highly placed such persons might be.

Segun Adewole The Ogun State Commissioner of Police, Edward Ajogun, has said the cows that strayed into the compound of Nobel Laureate, Prof. Wole Soyinka, are owned by a Yoruba man and not a Fulani man. Ajogun who spoke to newsmen when he paid a visit to the compound said only three cows strayed into […] Read Full Story 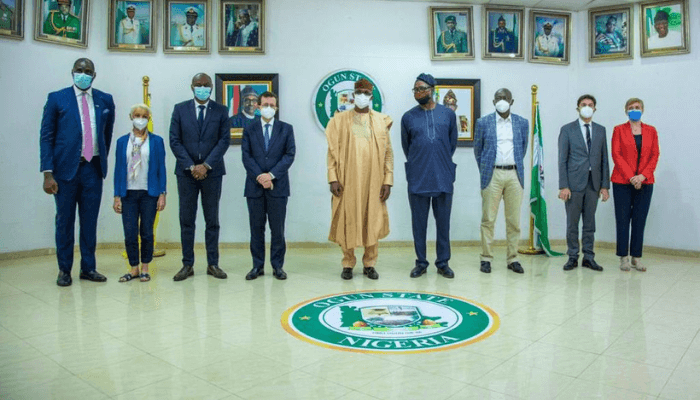 Fan Milk Plc, a Danone Company, signed a partnership agreement with the Ogun State Government to establish its flagship dairy farm at the Odeda Farm Institute, in the Odeda Local Government Area. The partnership, an alliance with the state, is to introduce global standards in dairy farming, empower local communities and reduce unemployment rates. It […] Read Full Story

The police in Ogun State said it has arrested a “kidnap syndicate made up of members of the same family.” Their arrest, NAIJALOADED learnt, was sequel to many kidnapping cases...