President Muhammadu Buhari on Saturday revalidated his membership of the All Progressives Congress (APC) in his constituency in Daura, Katsina State.

President Buhari, who was accompanied by APC Caretaker Committee members; Senate President, Ahmad Lawan; Governors and other party members at the exercise declared that the era of endorsing people from Abuja was over.

Elites not interested in rating but harassing my govt ― Buhari

He said that his objective was to ensure that the party was returned to the people at the grassroots by starting from the bottom up from polling unit to ward to the local government to the state and then to the federal.

“Without any incentive, they must come out and defend the party at any level so that we, you and the party will feel secure and comfortable because the old-time of putting hands in the pocket is over because the money is no longer available.

“The problem is that I will like especially the elites to please be reflective. When we came, where we were, the resources available and the condition of the infrastructure.

“So for a year’s daily production, Nigeria would earn having 2.4×100 dollars everyday. But look at the condition of infrastructure, you know this better than I do.

READ  Incident Should Not Be Politicised – Buhari Condemns Attack On Ortom

“I know I went to every local government of the country in my three consecutive attempts to become the President. You know the road more than I do. You know the condition of the rail, the railway is dead. Now look at it everywhere we go, what did they do with all these monies?

“When we took over the administration, production went down to about half a million barrels per day, the price collapsed. We had to do what is called a bailout, wherever we got the money from. Upon all the money from 1999 to 2014 we gave out money from the Centre to pay salaries.

“No, Nigerian elites are not interested in rating the competence but they are interested in harassing us with all efforts we are making.
“You, who are in the field in charge of your constituencies, you have to make efforts to convince the elites to please give us the due relevance and respect we deserve that we are working so hard with limited resources.”

Buhari thanked the Senate President and the governors for accompanying him down to his constituency to register as the President and member of the party. He described their coming as a morale booster.

The President also thanked the Caretaker committee chairman of the party, Mai Mala Buni for shouldering the responsibilities of the APC. He described him as the most suitable person for the leadership position having been Secretary to the party for such a long time before becoming the Yobe state governor.

According to him, the Yobe state governor knows the details of the party more than him by virtue of his long service as the Secretar.
President Buhari also thanked Buni “for contacting all stakeholders and discussing with them our problems.”

In his remarks, the APC Caretaker Chairman and Yobe state governor, Buni said the exercise was in line with the directive given to them by President Buhari.

He said: “In line with the mandate given to us by the National Executive Committee of our great party under your leadership, it is to review this party bottom up.

He said the party was proud of President Buhari’s achievement.

Buni said: “Your Excellency, we are proud of you. We are very proud. When you came as the Head of State in 1983, Nigeria was bedevilled with a lot of crises.

“Crises of the economy, the Maitasine started in Kano, Maduguri, Gombe, Jimeta and other town and villages.

“When you took over, you dealt with Maitasine and you improved the economy. Those of us then in the secondary schools could remember. Secondary schools were closed because there was no feeding of students talkless of payment of salaries.

“You improved the economy within no time; the war against indiscipline was tremendously carried to ensure that the people were back to farm and become self-sustaining because that was the only quick way to economic recovery.

“So also when Allah brought you back in 2015 as the President, you inherited the Boko Haram that consumed a lot of states especially the North-east and particularly Borno/Yobe, where I came from, the two epicentres of the Boko Haram insurgency.

“No secretariat of the local governments was functioning but today, our people have been settled and we have stopped counting the number of bombs that explode on daily basis.

“Thank you, your Excellency, you have done us proud. We are proud of your achievements.

“This is the beginning of the registration and to us as a caretaker committee, as a party, we have started feeling that we have already succeeded.”

The post Elites not interested in rating but harassing my govt ― Buhari appeared first on Vanguard News.

The Senate on Wednesday asked President Muhammadu Buhari to declare a state of emergency on insecurity in the country. The resolution follows a motion by Senator Sani Musa on the abduction of students from the Government Science College Kagara Niger state. Senator Bima Enagi from Niger State in his contribution, accused the President of … END_OF_DOCUMENT_TOKEN_TO_BE_REPLACED Read Full Story

Segun Adewole The President, Major General Muhammadu Buhari (retd.), has received in audience the National Council of Traditional Rulers at the State House in Abuja on Thursday. This was disclosed by presidential aide, Buhari Sallau, who also shared photos from the meeting. “President @MBuhari receives in audience National Council of Traditional Rulers of Nigeria in […] Read Full Story 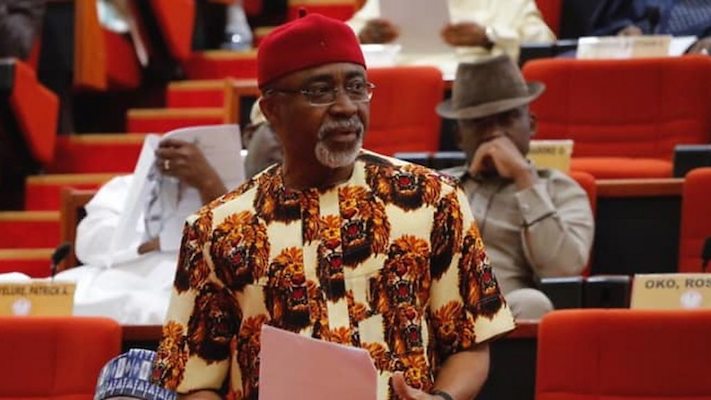 The minority leader of the Nigerian Senate, Enyinnaya Abaribe has blamed President Muhammadu Buhari and the All Progressive Congress (APC) government for the socio-economic woes bedevilling the country and leading it to precipice. Abaribe apportioned the blame in Abuja on Monday while fielding questions from journalists at leadership capacity training, organised by the minority leader […] Read Full Story