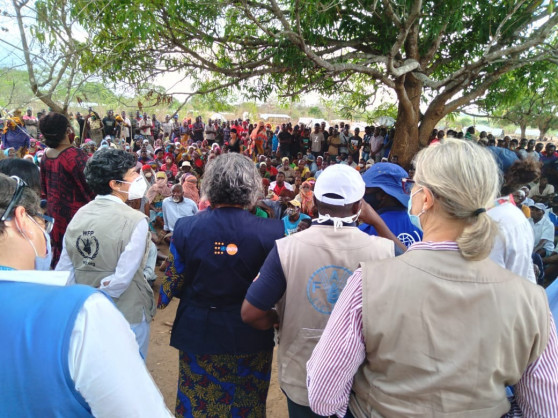 To respond to the urgent needs of an estimated 530,000 people displaced by violent conflict in Cabo Delgado, UNFPA has supported the government’s installation of sexual and reproductive health tents, women and girl-friendly spaces in relocation sites, distribution of female dignity kits and deployment of mobile clinics to provide remote-based care.

With 36 per cent of health facilities in the province damaged or destroyed, the sexual and reproductive health tents and mobile clinics offer family planning, antenatal consultations, and postpartum care services to ensure that the many women and girls of reproductive age have access to the life-saving services they require. The women and girl-friendly spaces offer psychosocial support and first aid, as well as gender-based violence case management, and empowerment activities including vocational and livelihood training for income generation, for vulnerable women and girls.

They were viewed during a joint mission of United Nations Regional Directors to the northern province, as well as to the capital of Maputo, in response to the worsening humanitarian situation in Cabo Delgado, in December.

“While immediate support is needed for internally displaced people in Cabo Delgado, particularly as the rains come, the resilience and laughter of young girls gives us hope!” said Dr. Julitta Onabanjo, UNFPA’s Regional Director for East and Southern Africa.

She joined the mission led by the Regional Director for the International Organization for Migration (IOM), accompanied by Regional Directors from the United Nations Food and Agriculture Organization (FAO), the High Commissioner for Refugees (UNHCR), the World Food Programme (WFP), and the Resilience Unit of the United Nations Development Programme (UNDP).

The UN delegation saw at first hand the needs and challenges of those displaced, the strain on host communities where social services are already stretched, and discussed how to reinforce the UN’s support to the Government of Mozambique and partners to respond to this humanitarian crisis.

Women bear the brunt of the crisis

The humanitarian situation in the three provinces – with people displaced across Cabo Delgado, Nampula and Niassa – continues to worsen, with women and girls fleeing violence and insecurity from Cabo Delgado bearing the brunt of the crisis as they face an increased risk of gender-based violence, unwanted and unintended pregnancies, and preventable death due to complications from pregnancy and childbirth.

More than 250,000 internally displaced persons (IDPs) are women, of which 126,000 are of reproductive age (15 to 49 years), and 15,000 are pregnant, with 1,660 expected to deliver within the month. In addition, 747 pregnant women will experience life-threatening complications while giving birth in the next three months and up to 2,530 women and girls could seek care in response to sexual violence (UNFPA MISP calculations based on a displaced population of nearly 530,000).

The number of people displaced by the crisis more than quadrupled from March to November 2020, with children accounting for an estimated 45 per cent of the displaced. More than 90 per cent of displaced people are staying with family and friends in host communities, whose already limited resources are being strained by the growing influx (UN Humanitarian Response Plan Launch Press Release).

The number of people displaced by the crisis more than quadrupled from March to November 2020, with children accounting for an estimated 45 per cent of the displaced. More than 90 per cent of displaced people are staying with family and friends in host communities, whose already limited resources are being strained by the growing influx (UN Humanitarian Response Plan Launch Press Release).

Insecurity has damaged or destroyed 36 per cent of health facilities across Cabo Delgado and there are limited functioning health facilities in the districts hardest hit by the conflict – Mocimboa da Praia, Macomia, Muidumbe and Quissanga. This has reduced capacity to detect and respond to disease outbreaks, including COVID-19, and to provide critical care, such as access to sexual and reproductive health, immunization, anti-retroviral medicine and treatment for tuberculosis (Humanitarian Response Plan 2021).

The delegation visited several resettlement sites now hosting a growing number of displaced families. The first visit was to Chiure district, the most highly populated district in Cabo Delgado, with about 300,000 inhabitants hosting some 25,000 displaced people across resettlement sites in the district.

At Marrupa village, the UN Directors learned that interactions between the IDPs and the host community are marked by solidarity and support, but are quickly being stretched beyond capacity. Displaced women, girls and families spoke of their basic needs, including clothing, while others wished for schools to reopen and to gain access to farmland, seeds and tools.

The Regional Directors travelled to two neighbourhoods in Cabo Delgado’s provincial capital, Pemba, where they witnessed the dire situation of IDPs living with host families. During the COVID-19 pandemic, some families living on tiny plots are hosting up to 45 people and barely coping. While the host communities have shown tremendous generosity, that may soon run out, which makes the need for humanitarian assistance and relocation of IDPs even more urgent.

The IDPs in Pemba are hosted in neighbourhoods that are prone to flooding and with the rainy season projected to begin at any time, there is an even more complex imminent humanitarian situation unfolding in Pemba.

Working as 'One UN' to support the most vulnerable

The delegation ended the mission with a visit to Nanjua village, one of the sites identified by the Cabo Delgado Provincial Government for the relocation of some 150,000 displaced people currently living in the provincial capital of Pemba city. Around 850 families have already been resettled in this village.

The Regional Directors met displaced families who urgently need food, non-food items like cooking and eating utensils, clothing, health care, agricultural seeds, and tools before the start of the rains.

The mission enabled the Regional Directors to share their impressions, advocate for those in need, and coordinate integrated support for the Government of Mozambique. Meetings of the donor community and diplomatic corps are taking place in Maputo to discuss the unfolding situation in Cabo Delgado.

Meeting the urgent needs of vulnerable women and girls and those displaced by violence in Cabo Delgado – joint UN mission - NNN. 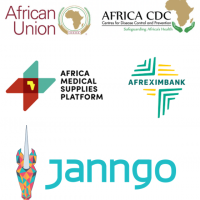 The Africa Vaccine Procurement Task Force [AVATT], created by the African Union to procure additional doses of vaccines so that Africa can reach a 60% immunization target, is pleased to report that it has received an offer of 300 million Sputnik V vaccines from the Russian Federation. This includes a funding package for any member state wishing to obtain this vaccine. Meanwhile, AVATT advises that the 270 million doses previously obtained from AstraZeneca, Pfizer and Johnson & Johnsons were accepted before the deadline for the first phase of allocation through the African Medical Supply Platform (AMSP). With these additional 300 million Sputnik V vaccines, AMSP accelerates pre-orders of COVID-19 vaccines online for the 55 African Union member states. “We are grateful to receive Sputnik V vaccines from the Russian Federation and tremendously proud to be able to offer them at AMSP for our AU member states,” says Dr. John Nkengasong, […]

Visionary leadership a catalyst in public’s appetite for sustainability; 44% believe climate change is currently impacting their lives; Increased awareness would change behavior. Public awareness concerning the mounting challenges stemming from global warming is reassuringly high throughout the region  as the government, organizations, and civil society continue to play their part in embracing environmental sustainability initiatives.  Despite significant efforts by all those involved consumers still face obstacles preventing them from translating their concerns into action via eco-friendly practices, according to a new report by Boston Consulting Group (BCG) (www.BCG.com). The report, titled ‘Are Consumers in the Gulf States Ready to Go Green?’, stresses that while 80 percent of GCC consumers have reaffirmed their preparedness to incorporate more sustainable actions into their daily lives, green infrastructure, financial incentives, and a greater selection of affordable eco-friendly goods and services would assist in accerlerating change. As per the report’s findings, 71% of the region’s […]

Coronavirus: WHO in Ethiopia signs grant agreement with Canada to maintain essential health services in the context of COVID-19 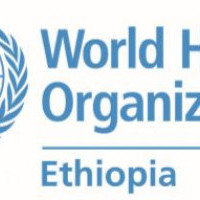 The World Health Organization and Canada signed an agreement to ensure functional health services in the context of COVID-19 in Ethiopia. Through this agreement, Canada will provide WHO with a grant in the amount of C $ 9.9 million to strengthen primary health care capacity to provide essential health services, particularly for women, girls and vulnerable populations, while An effective response to COVID-19 is maintained to prevent further preventable illness and death among the Ethiopian population. The WHO Representative in Ethiopia, Dr. Boureima Hama Sambo, thanked Canada for the funds available to support the continuity of essential health services. She said: “The grant will not only strengthen the provision of quality and gender-sensitive essential health services at the primary care level, but will also boost the resilience of the health system by building the capacity of regional and municipal health authorities to cope with current and future crises. “ This […]

Coronavirus: WHO in Ethiopia signs grant agreement with Canada to maintain essential health services in the context of COVID-19 - NNN.